Have you ever purchased a device because you preferred the design of that product? I am pretty sure you did, and some of us are willing to pay a price mark-up just because of the unique look the merchandise brings to us.

Though functional aspects and specifications such as built-in drivers and noise-cancelling components are important in assessing items, headphones, headsets and earphones are no longer only focusing on these areas. Aesthetics now  have a strong impact on the purchase decision-making process. Today let’s look at some of the representatives with outstanding and unusual design in these three listening device categories.

SOMiC is a new global contender in the gaming headset market. With its superior quality and affordability, it successfully captures a great bunch of fans worldwide. Recently, SOMiC introduced a new model called SOMiC G951S Purple. This product remains high quality, with a 40mm built-in driver, flexible mic and virtual surrounding sound system. However, their products do not stop here by offering a superb listening experience. 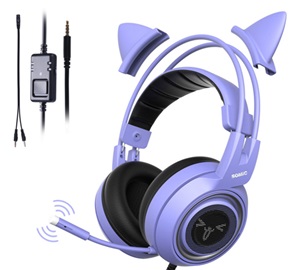 What makes this product unique are the detachable cat ears and emoji face on two sides of the headphone. Such a design specifically fits young girls and female live hosts who want to show off their cuteness, meanwhile enjoying an outstanding experience with world-leading specs. Since the cat ears are detachable, consumers also have the freedom to use it as a regular headset. Overall, it is a headset that fits various occasions from serious game time to a cosplay party.

Beats has a reputation in designing and producing some of the most fashionable headphones. Since it hit the markets with a considerable amount of celebrity endorsements from Hollywood around the early 2010s, it has become the icon of the headphone industry.

Since they have a massive amount of great collaborations with other firms, it is impossible to decide the best design among their product lines. However, in my opinion two collaborations stand out because of their colour selection.

Firstly, the one on the left was the result of a partnership with Balmain. The selection of colour highlights the brand identity for both companies. On the one hand, the gold with green shades presents a sense of mystery and nobility, which fits Balmain as the world’s leading clothing fashion brand; on the other hand, this same colour provides a combination of culture and future. This integration has focused on the brand image that Beats tries to deliver.

Another collaboration that catches my eyes is the Fragment series on the right, with the Japanese artist Hiroshi Fujiwara. The design employs matte white and glossy silver. It matches Mr Fujiwara’s personality as being bold and unconventional.

Overall, these two designs from Beats are simple and clean but draw the people’s attention. The use of colours brings different perspectives over other competitors’ products. 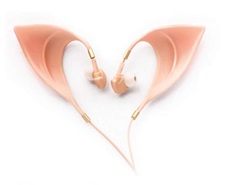 Speaking of standing out, Turpaka has also introduced an earphone with an elf-ears design, besides the cat ears from SOMiC. It offers an option for users to listen to music while cosplaying as an elf. However, the firm had solely focused on producing cosplay items such as vampire’s fang. Therefore, the introduction of the elf earbuds pays more attention on aesthetics rather than functionality. 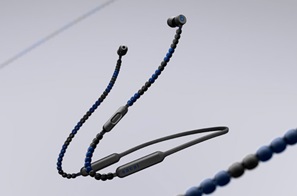 Another outstanding style in the earphone category is Beats with SACAI. The design places great emphasis on ethnicity, which is reflected by the appearance of the wire. Unlike any other Beats’ series, a necklace-like cord compliments SACAI’s branded clothes. The uniformity creates a special sense of beauty that makes it different from other earphones.

The aesthetic look should not be the only focus of music listening devices. Meanwhile, it is great that these products feature a magnificent appearance; a combination of both quality and beauty is the way to select the perfect match for you.